This site was created as a learning platform to inform the global community that the science of living souls involves a force ignored by scientists. As tripartite beings, we cannot ignore the fact that we are living souls in our search for truth. To be sure, the breath of life is perpetual and originates from an eternal source. We worship within our body temple and our biomaterial veil, hyaluronic acid (HA). That said, the object of my faith is also the object of my science—our temple veil. This blog explores all aspects of the double veil which has two interactive sides mediated through the Spirit within us, the temple of God. 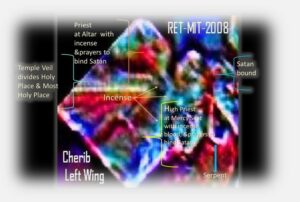 Figure 1. The left wing (facing the image) of the cherubim tells of the tabernacle and the veil. Also, observe the accurate image of the priest, high priest, and “the dragon”. Prayer and incense from the priests and the high priests (blue) bind Satan. One can see the different forms of the serpent.

First and foremost, the secret place is the Most Holy Place. Moreover, a double veil once divided this secret place from the Holy Place. Interestingly, the hydro-image in the figure captures self-assembling hyaluronic acid (HA) fragments during dehydration. In fact, this divine episode depicts Satan, the serpent or dragon held by an angelic being. Noticeably, a Leviticus high priest (red robe)  offers prayer and incense in the Holy Place. Similarly, the High Priest offers animal blood on the Mercy Seat in the Most Holy Place.  To be sure, this ritual was a temporary fix for sin (Exodus 25:17 KJV). Finally, one can trace the bluish incense trail from the hands of the priests to that of the bound dragon.  It is clear that the ability to interpret hydro-images need an in-depth knowledge of the Holy Scriptures. For instance, the High Priest’s attire, the Mercy seat, and the path of the incense would be meaningless to the uniformed. In this way redemption is hid from unbelievers (2 Corinthians 4:3). These mysteries kept secret for ages are now being revealed to Believers (Colossians 1:26). Why create this blog? The messages hidden for ages must go out so that all mankind would be without excuse (Romans 1:20). When we are judged according to the Gospel, unbelievers will have no Redeemer and will receive eternal punishment (Romans 6:24). 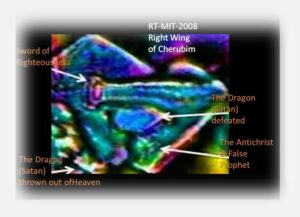 Figure 2. The HA hydro- image of the cherubim’s right wing (facing the image) tells the story of Satan & the dragon, who gets thrown out of heaven.

The right wing of the cherubim tells an accurate story of Satan. Perhaps only spirit minded people, who study biblical theology, can observe such imaging. Incredibly, HA fragments self-associate into a pattern of cherubim. This highlights the complete Gospel message. More specifically, the complete image tells of God’s redemptive plan, including Satan’s defeat. Furthermore, other HA hydro-images reinforces this theme. The imaging of divine messages by HA fragments during dehydration is perhaps one of the most extraordinary science and faith experiment to date. If a printed curcuit board is scrutinized by a non-engineer, it would appear nonsensical. In this same manner reading HA hydro-images requires a comprehensive knowledge of the Old and New Testaments.

The Gospel Hidden in the Cherubim Wings

For those who can understand HA hydro-images, the messages are very clear. The Gospel is in the cherubim wings. Of the four wings seen for HA fragments in water, the top two tells us about the temple rituals needed to bind Satan and the defeat of Satan. The botton two wings tell us about the death and resurrection of Christ. These results sum up the Gospel. That said, these messages hidden throughout the ages are revealed as proof of the Gospel. Why? The reason is because God’s judgment against the world could only be fair if man is without excuse. Scientists are denying that we are tripartite creatures and that we have a creator. Their ludicrous theories of life are nonsensical. Be that as it may, these theories will persists and people will accept them despite indisputable proof that the Word of God is true. 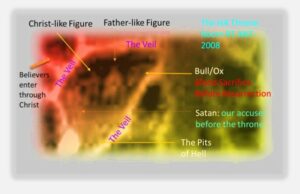 Figure 3. This image of the throne room shows stunning accuracy created from the self-assembly of HA fragments shows that our creator designed us in his image and after his likeness. This tells us that , the Gospel of Jesus Christ is in the veil (flesh).

Amazingly, hydro-image embroidery in figure 3 shows the throne room of God. At the same time, the bull on the right has his head over the altar (Leviticus 16:14 KJV). Also, there is a smaller seated image at the right-hand side of the larger seated image (Luke 22:69 KJV). Therefore, according to the Bible, the Christ looking figure has his right hand on the head of an angelic being lower down. It appears that this same being is bruising his right heel (Genesis 3:15 KJV). How can this be?  Would such nanoscale hyro-images emerge for unbelievers under identical conditions? Probably not! Without a doubt, HA hydro-image confirms the authenticity of the Bible. Brothers and sisters, a video of this discovery from dehydrating fragments of HA should convine you that this hidden Gospel message cannot be disputed. Examination of this image will prove its authenticity.

The States of Man

The two states of man will not be the same. One will be united and the other lost for all time. Man was created from the dust of the ground. It was the breath of life from the Lord that made him a living soul. Why place him in the garden? The Garden is heaven on earth. Man could fellowship with God directly. This was man’s original state. After man sinned, he entered a fallen state separated from his Creator and locked out of the Garden. The Gospel is the path back to God where man’s soul is restored. Outside of the Gospel, there is no salvation, but only eternal death. In essence, man either rises to eternal life or sinks into eternal death.

Figure 4. Here, the complete cherub includes scenes reflecting the death and resurrection of Christ. Faith and  knowledge concerning the bible is critical to discerning hydro-images.

Figure 1 and 2 show that the veil was once a barrier that separated man from his Creator.  Fortunately, the High Priest forever, Jesus Christ shed blood. As a consequence, God tore the veil in two (Matthew 27:51 KJV). Thankfully, we now have access to the Father (Hebrew 10:20 KJV). Also, the serpent has no power over the Children of God, and he has no authority over them (Revelation 12:9 KJV). Consider that despite the evidence, fallen man will continue to reject the idea of a creator God. Why?  The “god of this world” has a legal hold over the unsaved; he will not yield. As previously emphasized, only faith in the promises of God and belief in his Word can save us. So, Satan uses lies and deception while cloaked as an angel of light to destroy man and his seed.

Revealed, but rejected by many

The Secret Place is revealed to the Hebrews and Gentiles through prophets, ministers, and by Christ himself through parables. However, the rejection of Christ is a choice made by people who refuse to believe. To be sure, the message concerning Christ is provocative to those who resent him. That being said, the unmerited conversion of the heart by some redeems them. Amazingly, research involving the self-association of HA fragments led to divine imaging thought experiments. That is to say, focusing conscious mind on HA fragments in water causes things to happen. For example, dehydrating samples can be observed and photographed during the process.  That being said, HA structural information as it relates to the veil and Ezekiel wheel provides still more proof of bible authenticity. However, there is little doubt that an observer’s belief system influences results.

In the beginning, after man becomes a living soul, time for him starts. A giant wavefunction encompasses his total time and space conscious existence. This total experience–from the beginning– is (0). That said, his expulsion from the Garden of Eden is (-1). The “Book of Life”, which is the bible, tells of redemption (+1). It is all about flipping the state of man’s soul, re-entry into the garden, and victory over death. Mathematics supports this idea (Euler and Schroedinger). Life is a wavefuntion. By definition, redemption would require that man completes the cleansng cycle for restoration. According to the wavefunction, this man must come from above, die, resurrect,and return to the above. After all resonating souls (his seed) are synchonized, the new man and his seed return to earth having entered eternity with our creator (time,space = 0).

Interestingly, the energy of a photon is porpotional to its frequency times Planck´s constant. Why? What if your entire existence in time is one complete wavelength defined as the “earth age”? Further, suppose that ones conscious beliefs define individuality. Planck’s constant allows for a non-human factor that is unchanged through time. It appears that the Designer left a physical clue that He fine tuned the universe for us. Therefore an intelligent designer exist outside of time and this earth age. Consider that the entire Gospel tells believers how our souls can pass through the torn veil into the presence of God, our creator.

….
The names of the 4 living creatures are attached to their molecular modeling results.
…
From the Turner experiment above, one sees the faces of a lion, a man, an ox, and an eagle, embroidered within the matrix of self-aggregated HA fragments (Eze 1:7-12). All results are consistent with Turner’s findings of the veil described in Exo 26:1-4 and in figure 1 above. These data provide indisputable proof that hyaluronic acid (HA) is a pattern of Moses’ and Ezekiel’s veil.

The Spirt of the living creature is in the wheels. (Ezekiel 1:20) I perceive that the HA double veil is the outer wheels with the Spirit of the Lord within the wheels. In the middle of the wheels, DNA is made. This turning helix inside the HA turning wheels gives the appearance of a “wheel within a wheel”.

Still an unbeliever?
But, you don’t want to go to hell?

The gateway into eternal life is through the veil, which is to say through Christ. Jesus was born of The Spirit, the Water, and the Blood, which are one on earth (1 John 5:8). We must be “born again” through Christ so we can become one in him (John 3:5) as he is in the Father (John 14:20)