HA structure and properties make it suitable for cargo transport, for intranet messaging, and for serving as a theobiologic transformer. This makes HA the ideal veil for the heart, where the Blood, Water, and Spirit can come together as one (1John 5:8). The Spirit transforms the heart and since the veil is torn (Mark 15:38), after death we “Believers” shall see God. Afterall, we are the temple of God (1Corinthians 3:16). 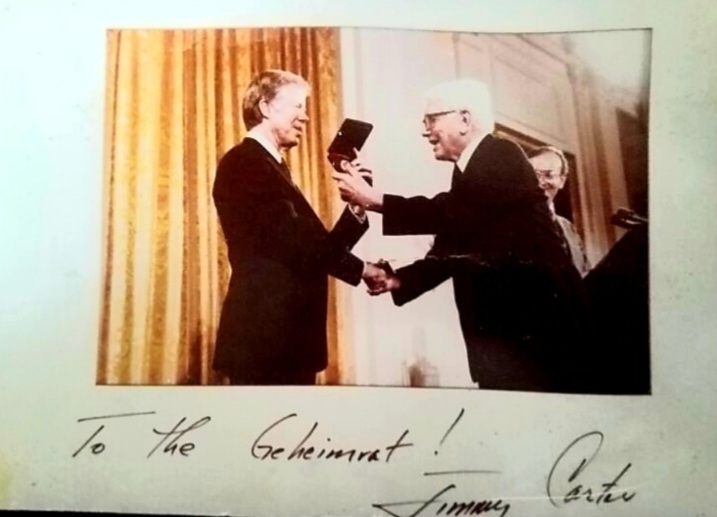 Picture of President Jimmy Carter presenting the National Medal of Science to the Late Dr. Herman Mark in 1983. Given to me that day at the now NYU School of Engineering,  an historical landmark for Polymer Chemistry. Click image to see back side.

Also to my grandfather, Reverend Joseph Ely born in Roseau, Dominica, but left home for El Callas, Venezuela in a 20-foot sloop in 1889. He later immigrated to New York City in search of his father. As my family’s spiritual leader, he contributed to my realization that God was in Christ and his Spirit is in us, his temple. Thanks to the Spirit of God for directing me to this capstone discovery of the biopolymer veil within us, the temple of God. Without a doubt, our temple veil is the most important biopolymer ever discovered because it symbolizes man’s relationship to his Creator.

My grandfather took risks to get from Dominica, WI to NYC before he eventually settled in Portsmouth, Va. I followed in his footsteps and made it from my birth home of Portsmouth, Va to NYC where I found extraordinary success. I share my Portsmouth Notable honors with him with gratitude.

HaShem (Hyaluronic Acid
Synthases & Hyaluronidases form the Extracellular
Matrix) Veil or “The Name” Veil can be purchased as an ebook.

Given that we live in a time of great deception, my confirmation of the Gospel  confirms, but adds nothing to the Holy Bible. That said, May the Light that continues to lead me also lead you.  Read my memoir Major Obsession.

Dr. Raymond E. Turner is a servant of the Sovereign God, a notable of Portsmouth (Va), a former research affiliate at MIT, and Executive Dean (Retired) of Roxbury Community College (RCC) of the Commonwealth of Massachusetts in Boston. He has several earned degrees in chemistry, which include M.S. and Ph.D. degrees from the New York University School of Engineering (formerly Brooklyn Poly). Turner, nominated by the chemistry faculty, was inducted into the Sigma XI Research Honor Society, and also awarded “best dissertation” in Chemistry for his pioneering research on Hyaluronic Acid Physical Properties in 1986.

Turner was a post-doctoral fellow at Harvard School of Public Health and Tufts University School of Medicine. His final research appointment was at the Center for Materials Science and Engineering, MIT (1/06-12/08). Now in his retirement, Turner shares results from his ultimate research project. While a research affiliate at MIT, he discovers that hyaluronic acid (HA) is a pattern of both: the Hebrew temple veil and Ezekiel’s wheels. Amazingly, HA veils the spirit within us even as DNA translates and transcribes information. Hidden gospel messages found within hydrated hyaluronic acid (HA) fragments provide scientific proof of the Gospel of Jesus Christ. Turner created the theobiology blog to show the world that we are the temple of God and the Spirit is within us (1Corinthians 3:16).

God can be found in the things that are made, including man (Romans 1: 19, Genesis 1:27). Dr. Francis Collins says that DNA, a double helix, is the Language of God. Hebrews 10:7 and Psalms 40:7 say that Yeshua (Jesus) came to earth in "the volume of the Book." If DNA is God's Language written on the pages of His book, then HA is its cover or veil. In contrast to Moses' temple built by the hands of man, we are God's temple (1Corinthians 3:16) built by His hands after the same heavenly pattern. My research shows that the HA "Flesh" Molecule is a pattern of the Hebrew Temple Veil (Exodus 26:31-34) & Ezekiel's Wheel where the spirit was (Ezekiel 1:20). We are truly created in the image of God (Genesis1:27). The soul of Believers is anchored to Christ, our Veil of Righteousness and Gateway into eternal life.

First and foremost, all research presented must not contradict the Holy Bible, the divinely inspired and inerrant Word of God.

HA: Hidden Messages in Dehydrating HA Fragments. Scientific proof that God was in the Veil/Flesh (Romans 8:3). Finally. He can be found in the things that are made (Romans1:20)