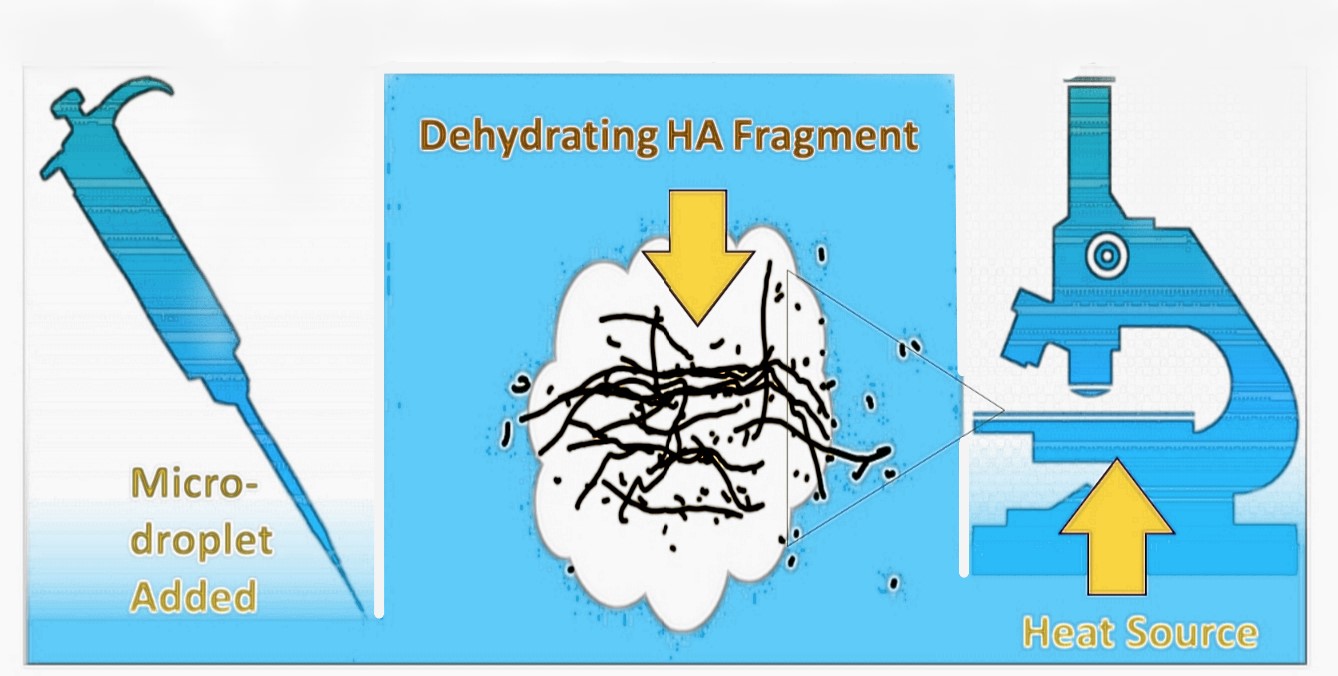 Fig. 1. Hydro-images form patterns of the Gospel formed from low molecular weight HA fragments, which are dehydrated on glass slides during imaging. Samples were subsequently subjected to numerous instrumental analyses, including SEM, TEM, Electrospinning, and TM-AFM. It is possible that an unbeliever might not observe the same hydro-images as a believer.
…

With respect to the veil, it is important to note that God gave its pattern to Moses directly, (Exodus 25:9) and to Ezekiel (Ezekiel 1:3) and John (Revelation 4: 7-8) through visions. Today God writes his epistles on our heart (2 Corinthians 3:3). But if our gospel is hidden, it is hidden to them who are lost (2 Corinthians 4:3). This author explored HA veil biopatterning using analytical methods only recently invented. In this work it appears that the Spirit engraves [G1449 Strong’s] hydro-images on the HA veil. The images shown on this site formed from HA fragments during dehydration. How can this happen? Dehydrating HA fragments on glass slides self-assemble into various molecular embroidery patterns. That is to say, hierachical patterns form hydro-images reflecting the Gospel. How is this possible? Such hidden messages may have a divine explanation. Maybe the spirit in the HA helix wheels (Ezekiel 1:20) is in control. Also, faith plays a role in how our spirit interacts with the veil. In the laboratory frame, observable embroideries by Believers differ from those of unbelievers. See “Hidden Messages in Water” by Dr. Masura Emoto. Traditional scientists dismiss Dr. Emoto work just as they have dismissed the Bible as the “Word of God.” Perhaps this is due to a difference in an obsever’s conscious mind and intention. Science has no answer for this!

The difficulty in dealing with traditional science is the inability of participants to accept the Invisible Creator (Colossians 1:15, Hebrews 11:27, (John 1:18, 1Timothy 6:16, Exodus 33:20). Without a doubt, most scientists dismiss the idea of a creative intelligence from another dimension. This belief is in spite of evidence to the contrary. The nation of Israel has always acknowledged the unseen God even to this day. For this reason I decided to establish scientific hypotheses based on the biblical assertion that God can be found in the “things that are made.” If God created man in His image (Genesis 1:27) and if the Hebrew tabernacle was a picture of Christ as our eternal High Priest, then we (Believers) are in Christ, our Tabernacle (Temple). In keeping with this line of thinking the veil that hangs in the temple (Hebrews 10:19-20, Matthew 27:51) must also be in us, the temple of God (1Corinthians 3:16). As a testable object, what is the biological image of the veil?

The scientific finding based on the above hypotheses is that hyaluronic acid (HA) is the biomatrix temple veil. Perhaps faith plays a role in how our spirit interacts with the veil. In the laboratory frame, observable embroideries by Believers may differ from those of Unbelievers. See “Hidden Messages in Water” by Dr. Masura Emoto. Traditional scientists dismiss his work just as they have dismissed the Bible as the inerrant “Word of God.” Maybe this is due to an observer’s conscious mind and intention. Since God knows your thoughts and the intent of the heart (Hebrews 4:12), He writes letters to Believers on the veil of their heart (2Corinthians 3:3). Hovering over dehydrating HA fragments while imaging the process over time (see figure1) may lead to different photographic outcomes. 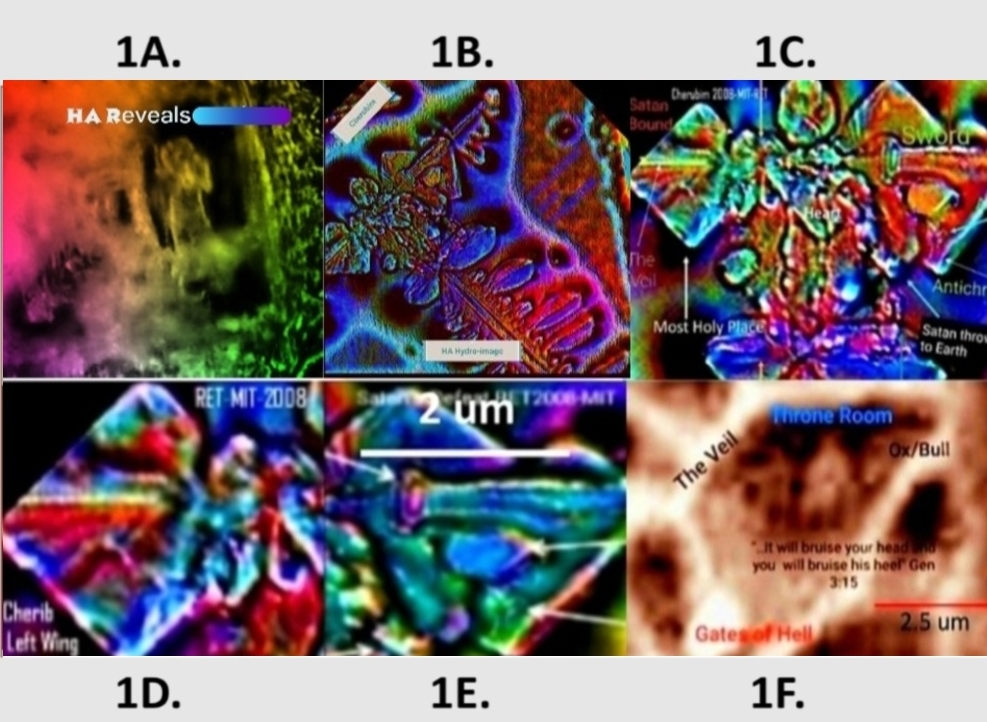 Fig. 2. Unbelievable results are seen for dehydrating HA fragments under the heat of the optical microscope. In conducting experiments presented in this treatise, a distinction is made between a spirit-filled observer and an unbeliever. In figure 1A-1F, HA fragments self-assemble into hydro-images depicting the Gospel. Close scrutiny shows: (1A) the patterning of a resurrection figure standing in front of a tomb. There is the image of a serpent at an human like image at his right heel. What you see in this image should be contrasted with 1F. In 1B, 1C, & 1D, we see an illustrated cherubum, and (1F) an accurate presentation of the throne room. One with knowledge of the gospel can see in figure 1F a pattern of the heavenly throne where the Son is on the right-hand side of the father and much more. 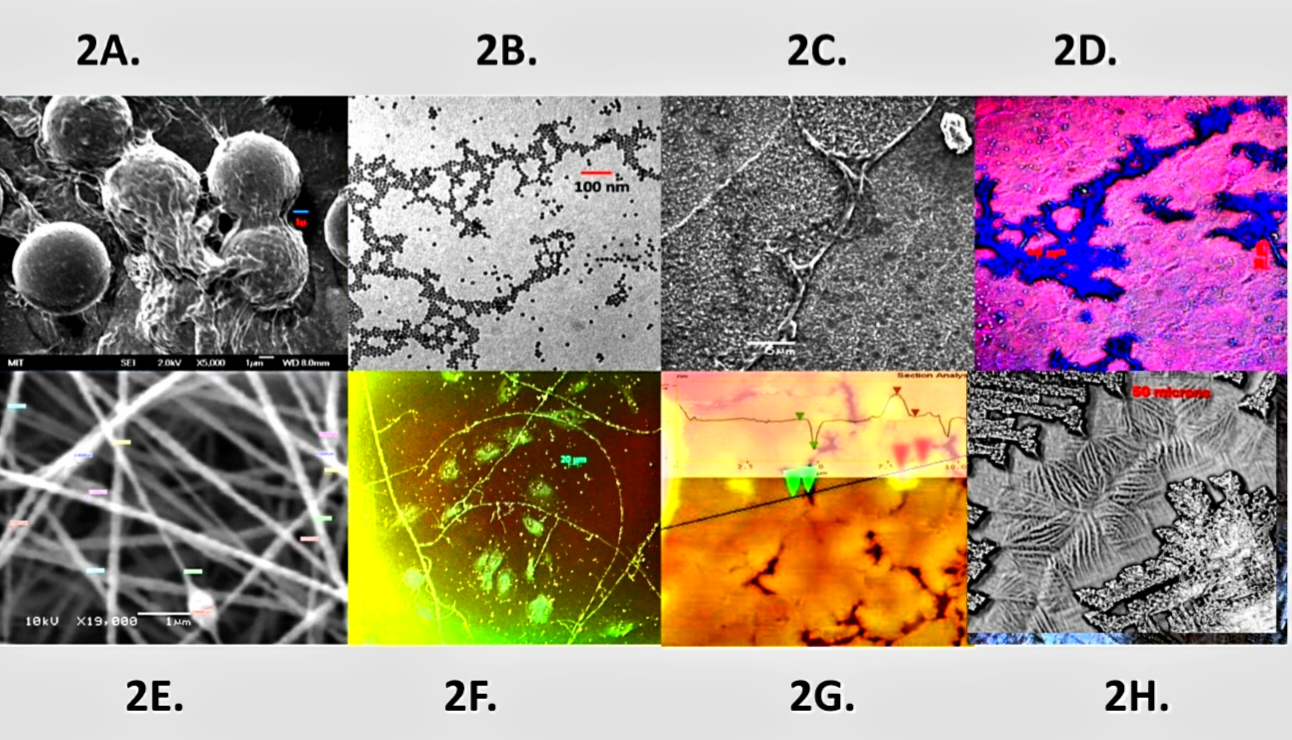 Fig. 3. In figure 2A; polystyrene beads are added to a solution of HA oligomers, dried, and analyzed using SEM; in 2B, an HA solution is mixed with gold nanoparticles and analyzed using TEM, in 2C; HA dehydrated on microscope slides is analyzed by SEM, in 2D; HA droplets are dried on chitosan coated slides and stained with alcian blue, in 2E; a physiological solution of HA fragments was electro-spun and the anayzed by SEM, IN 2F; a 7 day cell culture in the presence of HA shows cells remained viable, in 2G; HA on chitosan coated slides were analyzed by TM-AFM, and in 2H; HA droplets are microwaved exhaustively.

An embroidery resembling the resurrection of Christ can be seen in figure 1A. Notice the serpent at the right foot. This is consistent with the embroidery of the throne in figure 1F. The apostles creed (minus reference to the exclusivity of Catholicism) sums up Christ’s life as it pertains to the Gospel. Observe figure 1B and 1C. A fully formed cherubum emerges from dehydrating HA fragments complete with a flaming sword (Genesis 3: 24. Each part of this image has a gospel message. In any case, the appearance of the cherubum is proof enough that HA is a pattern of the temple veil (Exodus 26: 31-34). A fully formed cherub illustrates the gospel message. The right wing depicts the Holy Place and the Most Holy Place. The truth is that the Gospel is hid from those who are lost. The left wing depicts Satan’s defeat. One can see the large sword that appears to block the escape of the dragon, who is being thrown out of the cherubum’s body. The large stone looks like a blockage as well. Remember that these images are being interpreted based on the bible and nothing else. Everything in the left wing is consistent with the expulsion of Satan (the dragon) from heaven. In Figure 1F, the scriptures are fulfilled. To see the “hidden message” here, one must be a believer and spiritually enlightening. For me, this message shows Christ’s victory over Satan and his seating on the right hand side of the Father. Close scrutiny shows that this hydro-image is 100% accurate when compared to biblical scripture.

discovery of the hyaluronic acid (HA) Hebrew temple patterning of the veil has several implications:

HaShem (Hyaluronic Acid
Synthases & Hyaluronidases form the Extracellular
Matrix) Veil or “The Name” Veil can be purchased as an ebook.

Given that we live in a time of great deception, my confirmation of the Gospel  confirms, but adds nothing to the Holy Bible. That said, May the Light that continues to lead me also lead you.  Read my memoir Major Obsession.

Dr. Raymond E. Turner is a servant of the Sovereign God, a notable of Portsmouth (Va), a former research affiliate at MIT, and Executive Dean (Retired) of Roxbury Community College (RCC) of the Commonwealth of Massachusetts in Boston. He has several earned degrees in chemistry, which include M.S. and Ph.D. degrees from the New York University School of Engineering (formerly Brooklyn Poly). Turner, nominated by the chemistry faculty, was inducted into the Sigma XI Research Honor Society, and also awarded “best dissertation” in Chemistry for his pioneering research on Hyaluronic Acid Physical Properties in 1986.

Turner was a post-doctoral fellow at Harvard School of Public Health and Tufts University School of Medicine. His final research appointment was at the Center for Materials Science and Engineering, MIT (1/06-12/08). Now in his retirement, Turner shares results from his ultimate research project. While a research affiliate at MIT, he discovers that hyaluronic acid (HA) is a pattern of both: the Hebrew temple veil and Ezekiel’s wheels. Amazingly, HA veils the spirit within us even as DNA translates and transcribes information. Hidden gospel messages found within hydrated hyaluronic acid (HA) fragments provide scientific proof of the Gospel of Jesus Christ. Turner created the theobiology blog to show the world that we are the temple of God and the Spirit is within us (1Corinthians 3:16).

God can be found in the things that are made, including man (Romans 1: 19, Genesis 1:27). Dr. Francis Collins says that DNA, a double helix, is the Language of God. Hebrews 10:7 and Psalms 40:7 say that Yeshua (Jesus) came to earth in "the volume of the Book." If DNA is God's Language written on the pages of His book, then HA is its cover or veil. In contrast to Moses' temple built by the hands of man, we are God's temple (1Corinthians 3:16) built by His hands after the same heavenly pattern. My research shows that the HA "Flesh" Molecule is a pattern of the Hebrew Temple Veil (Exodus 26:31-34) & Ezekiel's Wheel where the spirit was (Ezekiel 1:20). We are truly created in the image of God (Genesis1:27). The soul of Believers is anchored to Christ, our Veil of Righteousness and Gateway into eternal life.

First and foremost, all research presented must not contradict the Holy Bible, the divinely inspired and inerrant Word of God.

HA: Hidden Messages in Dehydrating HA Fragments. Scientific proof that God was in the Veil/Flesh (Romans 8:3). Finally. He can be found in the things that are made (Romans1:20)