Theobiology.com was created as a learning platform to inform the global community that the science of living souls involves a force ignored by scientists. As tripartite beings, we cannot ignore the fact that we are living souls in our search for truth. To be sure, the breath of life is perpetual and originates from an eternal source. We worship within our body temple and our biomaterial veil, hyaluronic acid (HA). That said, the object of my faith is also the object of my science—our temple veil. This blog explores the nature of the veil, which separated us from our Creator. 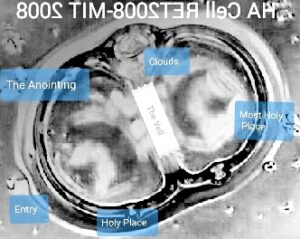 Figure 1. This hyaluronic acid (HA) hydro-image resembles a dividing cell infrastructure and the Hebrew tabernacle described in Exodus. Taken together with other hydro-images, such as the forming of Cherubim, these images relate to the Gospel. One may say that the Gospel was in the veil. The image of a kneeling or praying man on the left bottom part of the cell has become the site logo.

The above title comes from 1John 5:8. DNA, the molecule of life, has hyaluronic acid (HA) as its veil during biomatrixgenesis.” What exactly is biomatrixgenesis? It is a term coined by this author to explain the self-assembly of hyaluronic acid segments in living creatures. Such assembly can be explained based purely on science. However, that requires total blindness to the spiritual nature of tripartite living souls like us. That said, biomatrix self-assembly appears to be Spirit driven. Fortunately, science and faith compliment each other. According to the Bible, the life of the flesh is in the Blood, but it is the Spirit who gives life“.  For example, science shows that “life does exist in the blood while faith in is needed to discern works of the Spirit. In this respect, not seeing is believing and the “Revealer” of truth is the Spirit. This is why this discovery is so difficult to share.

Great scientific research is performed by unbelievers. However, highly descriptive objects such as the Hebrew temple veil are ignored. Why? The reason is simple. Man by his very nature is carnal minded. Recall the incalculable number of innocent animals killed to perform priestly rituals with their blood. Why is it that after many centuries, the temple veil was visibly torn in a manner humanly impossible only after the crucifixion of Christ? To be sure, there are both physical and divine consequences related to the veil.

We can find evidence and substance of unseen things through faith (Hebrew 11:1). In addition, “hidden messages” in blood prove all things consist in Christ (Colossians 1:17). As living temples, patterns within us resemble the tabernacle design of Moses and Ezekiel’s wheels.  Based on such patterns, the dividing cell reminds us of the temple veil that separates the Holy Place from the Most Holy Place.

Law of the Spirit of Life

After Man sins, an impenetrable veil separates us from our Creator. From the beginning God had a plan for our redemption. Unfortunately, due to our sinful nature, we most often reject his gift of eternal life. To further complicate matters, Satan–the great deceiver–vows to defeat us all.  In keeping with his plan, God rips opened the curtain after accepting the Blood sacrifice of Jesus Christ (“The Lamb of God“). As eluded to, we have free-will to accept or reject his sacrifice. The Holy Spirit beacons us to Christ. Before Christ’s sacrifice, the Leviticus high priest would sprinkle the blood of bulls onto the altar. Now, through Yeshua (Jesus), we are “born again” of the Spirit. Without a doubt, we are the temple of God and the Holy Spirit dwells within us. (1 Cor. 3:16). In the Spirit we bodly enter within the veil through the Blood into the Most Holy Place.

We know from science that a law in nature is never violated. Gravity on earth is a reality. However, we can overcome the power of that law with acceleration. We on our own can not overcome the force of gravity. That said, we cannot overcome the power of sin under the law of the Spirit. According to the scriptures, the wages of sin is death. That is the law. We, as the human race, need help to break free. Since life of the flesh (the veil) is the blood, we need an infusion of sinless blood. In otherwords, we need a Redeemer.

Figure 2. After image enhancement, this actual HA structure resembles “fine twined linen, and blue, and purple, and scarlet”  (Exodus 36:8 KJV). Notice the connectedness, which flows from scarlet (the Blood) through purple (the High Priest) to white (the Church) into the blue (Heaven).

The veil is an important object in the bible. It represents the separation of man from his creator, and the old covenant (based on the law) from the new one (based on grace). The torn veil was physically and spiritually ripped in two after the crucifixion. With both natural and spiritual properties, the temple veil is the perfect object to study using both science and faith. To this end, hypotheses are established based on descriptions of the veil by Moses, Ezekiel, and John. Todays advanced analytics were used to study hyaluronic acid (HA). These properties are compared to those in the bible.

To reiterate, the temple veil which once came between our Creator and us is “rent.” So, could it be that the HA biologic veil has a story to tell? It appears that HA, DNA, and laminin participate in a “Messianic skit” in blood. In the “skit,” mitochondrion DNA is the seed of the woman, laminin from the LAMB gene is a pattern of the cross, and HA is the temple veil. Incredibly, HA can hydro-image the Hebrew temple embroideries.

As seen in Exodus 36: 9, the length of one linen curtain in the tabernacle curtain array is 28 cubits by 4 cubits. In fact, this compares to an HA helical pitch of 28 angstroms.  According to the scriptures, eleven curtains were stitched together in the Hebrew temple. So, 12 angels sealing 12 tribes at the 12 gates to the city, give 144 sealed for 1000 generations (Psalms 105: 8). Recall that two wings (HA)2 (a pattern of Christ) must attach to HA12 to bind  alcian blue dye in the lab. This pattern indicates that the sealing of the 144,000 must wait for the Christ after the angels seal them. This occurs after the 4 living creatures lift up Christ to the throne now having 6 wings each. If each wing represents an elder, we now have the 24 elders around the throne. Also recall that it takes 6 wings (HA)6 to bind the HA around our cells in the lab, which is a pattern of the Holy tabernacle (temple) veil.

Biomolecules and the Veil

In any case, the Blood, the Water, and the Spirit agree in one on earth (1 John 5:8). Patterning of HA in the laboratory shows that it is in agreement with the tabernacle veil embroidery. To reiterate, the enhanced colors and the molecular contour of hyaluronate fragments agree with the veil description given in Exodus 26 and 36. Be that as it may, this is excellent proof that we are the “living temple” of God. Moreover, this result plus the fact that HA fragments are a pattern of Ezekiel’s wheel confirms the Gospel. Without a doubt, Yeshua (Jesus Christ) bled and died so that his people could gain eternal life.

Lastly, it is stunning that the cross-like cell adhesion molecule laminin has a helical tail. Analogously, this helical tail could disrupt the HA biologic veil (Mark 15: 38). Similarly, DNA with “dreadfully high rings” which describes Ezekiel’s wheel containing DNA and the inner workings of the wheels provide additional evidence for Turner’s conjecture that the gospel is in the veil. 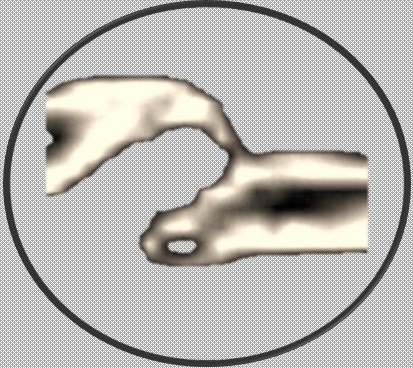 Figure 3. HA fragments encased in water during dehydration under the heat of the optical microscope. Amazingly, HA fragments appear to sense each other’s presence.

What if the intent of the heart affects matter? Consider the research of the Late Dr. Masura Emoto. Often referred to as a pseudoscientist due to the ignorance of scientists, he is the founder and the author of world-wide best-sellers such as “Message from Water” (1999, HADO Kyoikusha, Co., Ltd.) and “Hidden Messages in Water” (2001, Sunmark Publishing,Inc). Water was made to form crystals after influencing the process using words and melodic tones. The intent of the heart was reflected in messages transmitted over the samples. These messages ranging from hate to love resulted in observable changes in crystal patterning. For instance, heavenly patterns resulted from love messages while destructive crystal formed from hate messages. This work adds credence to my own experiments using HA fragments in water. That said, the intent of the heart of a believer reveals the gospel messages for me. A controlled human expetiment was never performed.

Segments of hyaluronic acid (HA) shape-shift and self-assemble into different patterns. Could these patterns be influenced by ones belief? For instance, an unbeliever with a hateful heart may see one pattern and a believer in the Gospel another pattern. In any case, the research presented here is for believers. Why? Because the veil is both physical and divine. Science and reason must involve faith. Spiritual discernment allows one to see hidden messages encoded in the “things that are made”. So, a knowledge of and belief in bible scriptures open hearts and minds to the Gospel. 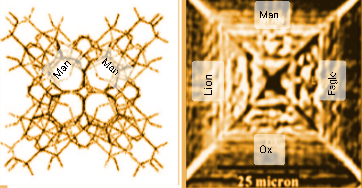